“I see how commonly people dread death…
there has got to be another way.”

“If they can just find that one tiny space where they are at peace, then they can leave.”

“This is a lesson on how to die, how to go into the mystery.”

“As I’ve learned, we are all stardust…We will remain a part of the universe but our form is going to be different.”

“I took his body up to the morgue myself.”

“Something happens between two people that is transcendent.”

“Everyone was sitting around so morose. I said ‘Let’s get up and dance!’
the whole energy shifted.”

“I end up living for the people who aren’t living.”

“An intimate and authentic portrayal…I was on my toes the entire time.”

“Visually and aurally rich. Dying has much to teach us about living.”

Lessons for the Living shows that the dying have a great deal to offer the living. Each person has an impression, a story to tell, about the mysterious act of dying and how it has affected his or her life. However small or great these moments spent with the dying are, these volunteers' lives have been change forever.

Kathleen has been preparing for her own death since ten years ago when she first volunteered for hospice. Even with a terminal illness she continued on with good humor seeing her end as just another thing that happens – just like her fabulous dinner parties.

Being there for a patient’s final last breath is something every volunteer trains for but rarely experiences. So Kristin was caught off guard when her patient died right in front of her. For a moment she is alone – still holding on to her own breath as if she, too, could die right there. Unaware of the patient’s passing, a chorus suddenly comes in and starts singing. Kristin finally exhales and then laughs.

Moving through his high school hallways, Mark recounts the first time he entered the hospice unit at age 18. He meets a terminally ill man with a broken voice who will tell him things about life no text book could ever write. Mark’s voice is strong and, with a steadfast gaze, he moves into the future.

Hospice volunteers are encouraged to speak with patients or offer gentle touch. But Leslie rarely does either. Instead, she tends to their spirit. We learn through Leslie that activity may be more of an imposition on the dying – as if encouraging them to grasp hold of a slippery rope. With Leslie at the bedside, both the living and the dying learn to let go in peace.

Chairs are scattered all along the gracious lawn outside the hospice unit – haphazardly left from the conversations once had. Leon tells us about his own conversations had with the dying – many of whom have alzheimers. Inside, we meet Trudi, a hospice patient, who engages with Leon over a game of cards as if it were just another day. Trudi may forget. But for Leon, this day will stay with him for years to come.

James is surrounded by human skulls in the Hall of Human Origins at the Museum of Natural History. You’re either alive or you’re dead. There is no inbetween. This is what was revealed to James during his hospice training. As we meander through the museum’s many exhibits on scientific discovery, James tells us what he has learned from volunteering for the dying – eventually we will all become particles – stardust. And back into the universe we go.

Sitting high above midtown Manhattan in his corner office – the world small and completely within his grasp – Duncan seems to have it all. However, it was only after training to be a hospice volunteer that his life became whole. It’s ninety-percent emotion in a world that is otherwise emotionless.

Having experienced the compassion and care a small village in China gave to her dying grandmother, Maeling decided to volunteer for American hospice patients. Even though she was fully trained, Maeling found there were challenges she didn’t expect – like communicating without words. In her great fear she found a small, simple solution: a music box. In the last moments of life words often fall flat of meaning. Music carries us through.

Sitting on a secluded park bench on one of the first warm days of spring, Jim gives an impassioned account of his experience walking down the hallway of the hospice unit. Some patients embrace him, others push him away. But every patient inspires him. He writes poems that speak of physical pain, emotional anguish and – despite these incomprehensible hardships – grace is revealed.

Last year something happened to me that was one of the more notable and significant changes in my life - I became a Hospice volunteer. The volunteer training was not simple - nine-hour sessions spanned over three weeks. Two-inch thick binders filled with do's, don't's, religious quandaries, life-death debates, bereavement exercises, guided meditations, and how-to's on the subject of holding a dying person's hand. And in the midst of this, I couldn't help notice the diversity of my peers. Here we were, a full room of thirty, 18 to 80-years-old, Christian-Hindu-Jewish-Buddhist-Agnostics, black-white-asian- indian-multiracial, timid-excited-calm-eager presences all sitting there in a small formalized conference room learning how to be with strangers who are dying. What led these people to want to do this seemingly morbid social service? Is it because they wanted to display their compassion for humanity? Or maybe the answer was slightly more involved. I wanted to find out.

Listening to the personal experiences people have had working with the dying – their calm, collected voices revealing their knowledge of something profound – led me to make a film encapsulating these stories. The film has encouraged others to share their stories and to start a discussion about the importance of not only hospice care but also the importance of uncovering the mystery of the dying process. Since the making of this film, our star subject - Kathleen Kelly - has passed away. She was happy to know she would become a spokesperson for hospice care through this film.

Lily Henderson’s debut documentary film, Lessons for the Living premiered at the Global Peace Film Festival in 2010. Since then, the film has gone on to regional and national film festivals including the Hampton’s International Film Festival, and is for sale through Alexander Street Press (educational) and through Tribeca Institute’s ReFrame Program on amazon.com. She was a two-year resident and curator for UnionDocs in Brooklyn and has been a member and co-organizer of the Brooklyn Filmmakers Collective for five years through which she has collaborated on many films including Keith Miller’s WELCOME TO PINE HILL and Alex Mallis’ forthcoming film LA NOCHE BUENA.  Lily works as a commercial director/editor for clients such as IBM, Current TV, Ogilvy Entertainment, AOL, Huffington Post and the Biography Channel. She is now in development for her narrative-documentary feature called About a Mountain based on the book by John D’Agata. More information here: About a Mountain

Ed David is an Emmy Award winning cinematographer who shoots documentaries, commercials, short films, experimental work, and television. His most recent clients have been Duracell, Microsoft, IBM, Met Life, Under Armor, Downy, Johnson & Johnson. His work has been recognized for many awards including the TedTalks top ten AD of the year, and AdAge’s 2013 Viral Video Awards for best Tearjerker for Expedia. He has a deep love for the work of Raoul Coutard, Michael Chapman, Gordan Willis, Robert Elswitt, and Maryse Alberti. He loves Cinematographers who can create a mood that truly enhances the dream-like quality of a story. He also loves Lily, whom he is married to. See Ed’s work.

Alex lives in Brooklyn, NY. His films have screened at IFF Boston, Hot Docs, DOCNYC, New Orleans FF, UnionDocs, and on The Documentary Channel and BBC News. His short SPOILS, a documentary about dumpster diving in New York City won the audience award at the 2013 Northside Film Festival. Alex is an occupier and created RIGHT HERE ALL OVER, a widely viewed and shared short documentary exploring the community and culture of Occupy Wall Street.

As director of photography, he shot Keith Miller’s WELCOME TO PINE HILL (Grand Jury, Slamdance 2012) and the upcoming FIVE STAR. Alex is an avid photographer and greatly enjoys the darkroom. He is an MFA candidate for Integrated Media Arts at Hunter College (CUNY) and an active member of the Brooklyn Filmmakers Collective and the Meerkat Media Collective.

Leslie Koren is a documentary filmmaker who has helped to produce Academy Award winning works, namely the 2008 POV and Sundance juried documentary, TRACES OF THE TRADE. Her

work has been exhibited in print, online and in festivals. She produced the documentary feature LESSONS FOR THE LIVING in 2010, directed by Lily Henderson, which is distributed through the Tribeca Film Institute’s ReFrame Collection.

Shani is Co-Founder of Fantasia Films Productions. She has served as Director of Film and Theater for the Office of Cultural Affairs at the Consulate General of Israel in NY. She is an Emmy judge for the National Academy of Television Arts and Science.

Elisabeth Holm is an independent producer and Film Program Director at Kickstarter where she oversees filmmaker education, editorial, events, and outreach. She is the recipient of the 2014 Sundance Red Crown Producers Award for her work on Gillian Robespierre’s OBVIOUS CHILD, starring Jenny Slate. The film premiered at the 2014 Sundance Film Festival and will be released by A24 this summer. Elisabeth also produced Keith Miller’s 2012 Slamdance and FIPRESCI Jury Prize-winning WELCOME TO PINE HILL (Oscilloscope 2013), was the Associate Producer of Joe Berlinger and Bruce Sinofsky’s Academy Award-nominated PARADISE LOST 3 (HBO 2011), is a TFI Tribeca All Access and IFP Lab alum, and was recently profiled in The L Magazine’s 2013 “30 Under 30.” She lives and works in Brooklyn, NY.

JOURNAL OF RELIGION AND FILM 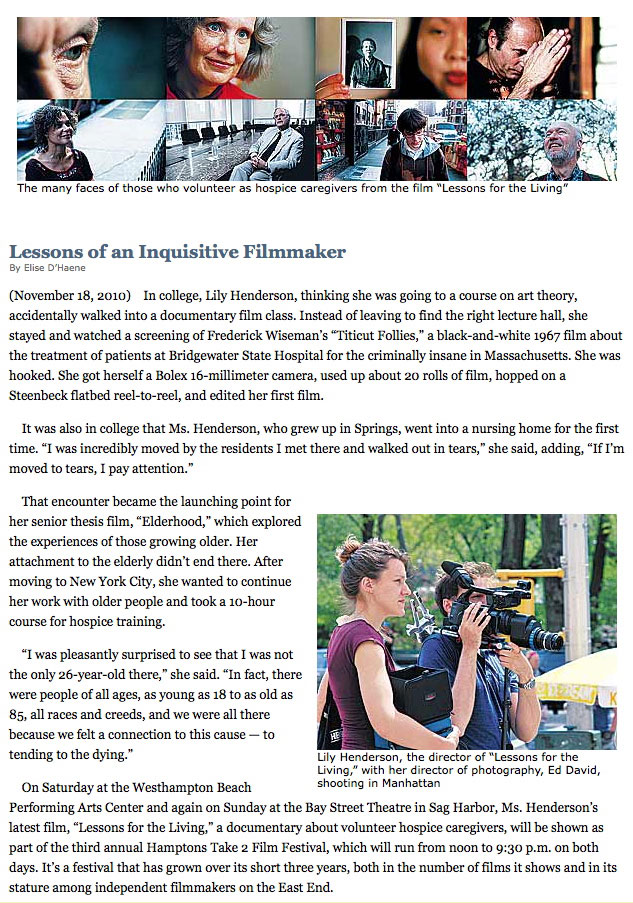 Singing to the Dead

The Hour that Passes

Email info@lessonsforthelivingfilm.com for information or call 631.804.2747